Obstructive sleep apnea (OSA) is a common sleep disorder in which throat muscles relax during sleep causing the upper airway to close. As a result, breathing ceases until a brief awakening restores muscle tone and reopens the airway. Untreated sleep apnea contributes to cognitive, cardiovascular, and metabolic morbidity, and has substantial negative impact on an individual’s quality of life. Each time the airway closes or narrows, oxygen content of the blood diminishes, carbon dioxide rises, and reﬂexive increases in respiratory effort eventually lead to opening of the airway, usually with arousal of the brain and disruption of sleep. The repeated arousals, associated with surges in sympathetic nervous system(“ﬂight or ﬁght response”) activity, in addition to intermittent hypoxia, may both help to explain increased cardiovascular morbidity in patients with sleep apnea. The untreated condition is also associated with daytime sleepiness, cognitive impairment, hypertension, heart failure, arrhythmia, myocardial infarction, stroke, diabetes, metabolic syndrome, and a shortened lifespan.

Treatment most commonly consists of nightly use of a nasal mask connected to a Continuous Positive Airway Pressure (CPAP) machine. The CPAP machine splints the upper airway open by supplying positive air pressure. However, the machine is expensive, reliant on electricity, and has suboptimal portability, noise, and aesthetics. 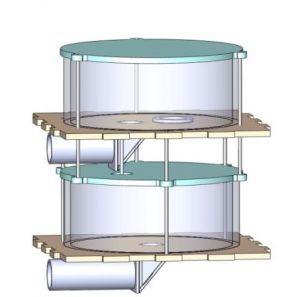 The aim of this work was to develop a low-cost, lightweight, quiet mechanical CPAP that would function without an external energy source for use in resource-limited settings. This is the ﬁrst known CPAP prototype designed to be powered entirely by the user rather than electricity. Standard CPAP machines waste the energy provided by the thorax during expiration against electricity-generated positive airway pressure. The mechanical CPAP approach described herein has the potential to capture a patient’s energy of expiration and use it to return fresh air, at the required pressure, back to the patient during inhalation. The process simulates continuous positive airway pressure normally provided by an electric machine with a blower, several computer chips, and extensive programming.

I have seen the people that my device will affect, and have met with the practitioners that will ultimately use it.  The tangibility of that encounter makes me want to be a more accountable and ethical engineer.